November 09, 2010
Interestingly, having in my last post posted a model, the issue I want to address in this post is the misuse of models. Firstly, let's consider what a model is and what it is not. A model is really an abstraction of reality, in most real-life situations it is impossible to capture all the parameters that influence any social phenomena. So for example, in economic growth there are far to many variables that impact economic growth. We can create some simplified model, which helps us attempt to capture at least the most important variables and suggest a way in which the economic growth mechanism works. Note, this is not a theory, a theory is an attempt to explain the workings of a mechanism whereas a model is only a simplification of a mechanism (see Mario Bunge for more discussion on this).
When one person or organization create a model, it is with a particular context and set of assumptions in mind. If they create a model which is valid for all contexts and situations and does not rely on any assumptions, then it is a theory. In social-science or business there are very few theories and even fewer that survive scientific rigour, there are however, many, many models.
We often see models being applied to help with the organization of ideas, and usually to help in some decision making process. However, as models become applied, their application often ignores the assumptions and the context on which they were founded. 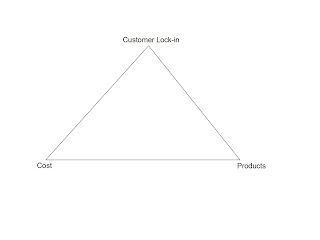 Consider the following model, called the Delta model above. The model suggests that there are two main business strategies, differentiated products and cost. With modern bundling a business can achieve customer "lock-in" (i.e making customers more dependent on a variety of bundled services, thus reducing turn). If a business strategy is able to achieve this "lock-in" then it can position itself away from product and/or cost leadership, potentially reducing R&D spend and increasing margins. This is a very simple model, with a number of key assumptions. One key assumption is that Porter's generic strategies hold true (let's assume they do).
Recently in a strategy meeting I saw the head of strategy produce this model, for explaning the strategic choices available to the company: 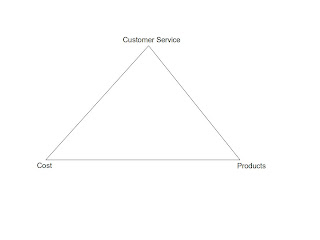 This would appear to be the exact model, previously described. But with a subtle difference, the top vertex has become "customer service" and the model was presented as a way for the company to position itself as either "best product", "lowest cost" or best in "customer service". Fundamentally, this is very different to the previous Delta model and makes a new assumption that pursuing customer service is a valid strategy (something that Porter might disagree with).  Did this model come out of mis-applying the previously described delta-model ? The meeting went on to describe how they would aim to be the leader at customer service, however they ignored a few very basic points: (1) they are selling a commodity and therefore products and service cannot be separated, (2) when selling a commodity, you cannot potentially separate products from cost. If (1) and (2) are really true then the entire model, and the basis on which their strategy was defined collapses into a dot (literally).
I have no idea, whether I am right or not. Only time will tell. However, I am very certain that I often see models misapplied or applied in contexts for which they were not designed. This does not in itself cause a problem, unless the assumptions made for the original model become fundamental to the outcome.
business models Models usage of models