The Mobile/Tablet future as I see it

This is a piece I posted on http://androidgizmo.co.uk/AndroidGizmo/Controller?news=news&id=5
I see a future where everyone has a tablet/communication device - which is in some way biometrically activated, i.e can only be activated by a single individual. This device is used for everything, from communication to setting devices in the home, plotting car journeys and paying the bank.
Due to increased electricity and gas prices, not to mention fuel - algorithms run that ensure efficiency, heating, cooling and water usage. Traffic is routed in optimal ways via communication with centralized control centers through the tablet/communication device. Travel is very much a recreational activity with remote working and login standard practice. The tablet/communication device forms tha basis for work, social and home life. Plugging the tablet into one or more controller interfaces opens communication with the car, the home or the work place. The Internet as we know it, is only one small component of our daily interactions. Know we are able to communicate with all devices in our possession, which will evolve to become more intelligent and configurable (if not human like).
Whilst connected into the office VPN, the toaster informs that the toast has reached the desired temperature and will be ready in 2 minutes, the coffee machine asks if it should start making a latte ? You decline the latte but go get the toast - or have it deliverred by a homebot. The garden monitor informs you that it is the optimum time to begin watering and suggests that the sprinkler we turned on for 10min and 25 seconds, you accept after checking in real-time your current water balance and account. A warning flashes that you have left a light on downstairs, with no-one present in the room and the light will shutdown in 30 seconds. 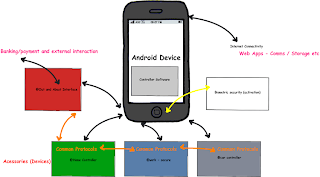 Most of this technology alreay exists in some form or another, there are two main reasons we have not as yet adopted it all in the way described above. Firstly, there is a cost issue - however cost of electronic equipment is constantly falling and fall further with critical mass. Secondly, we have not had a unified controller - and with it a unified protocal for all devices to communicate seemlessly. As we approach these two major hurdles, the above description will become a reality.
So things might look a little like this in the not too distant future
Posted by Avrono at 1:54 AM 1 comment:

What is the potential market for Android Peripherals ?

This is a recent thought I posted on AndroidGizmo

Whilst it is still early days in the Andorid peripheral space - there are only three listed manufacturers of development kits - which are needed to prototype and device. And furthermore, it seems as if these devices are either sold out or not available. It is still interesting to speculate on the types of devices that may emerge.

Firstly, we can expect to see standard PC peripherals now made to support Android devices. this includes:

Consider that for the first time we will be carrying a fully fledged computer running a very mature Linux operataing system, in our pockets. This means that we could use this device to control a whole range of things that we previously needed expensive computer harware for. This has applications in field testing, logging data, connecting, updating control devices and equipment. The business applications are plan to see. Issue your field team with Android devices and have them interface into a whole range of equipment on the move. Imagine a scenario where your plumber comes over and plugs his Android into your bolier, runs a diagnostic test, produces a report and subsequently fixes the problem.

For many years as an engineer, I have used patterns – which loosely defined are common approaches to solving common problems. For example the MVC (model-view-controller) pattern is commonly used when trying to solve the problem of separating data from functionality and the view of the data (whether this is the best approach is questionable, but it is one common approach).
Patterns appear in an organizational context in for example “Organizational Patterns of Agile Software Development” by James O. Coplien and Neil B. Harrison. In this book, they set out common problems that occur within software development teams and present common patterns for solving these organizational problems.
When starting a business, we are often confronted with a series of problems to solve. What business model should we adopt ? When should we look for premises, how and when should we grow etc ? One way of tackling these issues is to look at how others have done the same in the past and formulate a series of patterns that we can follow.
For example, how should I sell my new server software ? I might look at JBOSS and realize that they obtained success by making their software open source and carefully tracking users and following up with support services and other added-value offers, or I might look at Microsoft and decide to develop a sales team and sell the software on a license basis. Each of these patterns has it’s pro’s and it’s cons.
In many cases the patterns we need to move our start-up forward are out there, so there is often no sense in re-inventing the wheel. In other instances we may need to use a combination of existing patterns to create a somewhat new pattern.
Very, very seldom do we need to innovate to such an extent that we create an entirely new pattern. Most business even more simply copies existing ways (patterns) of doing things (see for example GEM report on entrepreneurship).
My advice would be, before you leap, have a look around at what similar organizations have done and are doing. Always look for patterns that you might be able to follow or adapt to your situation.
Posted by Avrono at 8:28 AM No comments:

Email ThisBlogThis!Share to TwitterShare to FacebookShare to Pinterest
Labels: Patterns in business

I spent some time in the past studying growth in business, of course there are a continuum of opinions on this topic, however, seven dimensions stood out for me. Growth (economic or otherwise) happens when these dimensions are in place: cooperation, collaboration, communication, incentives, standardization and co-ordination.

Successful Tech start-ups, consciously or otherwise have elements of these six dimensions in their business model (or user interface ). Take Facebook, for example, the interface fosters cooperation and collaboration it facilitates communication and in some ways stimulates competition. The incentives are physiological, but exist and by allowing developers to plug into their platform they have standardized the platform. All this is well co-ordinated and hence it is not surprising that they are on a growth trajectory.  The same dimensions can be found if we analyze Groupon, Twitter, FoureSquare, Google and others....

Whilst I realize this model is not complete, I would be interested to hear views on this .... are there any other dimensions that do not fit into the 7 listed above. Or do you have a strong opinion about this assertion ?

Posted by Avrono at 4:34 AM No comments:

Some years ago I shared a house with a group of day-traders. They operated on the NASDAQ every week day, playing the day trading game remotely. The deal was they traded and received payment for profits they generated and the number of transactions they made - they company providing the system and the funding took a percentage of profits and cut them off when losses where too high. Most days these guys lost money, occasionally they made some. I became interested and realized that there was an entire industry of websites, books, DVD's and training around how to make money. I kept hearing about this "one" guy who was making a fortune. Each day there were new stories of the heroics of this individual.


I began thinking, if I was recruiting day traders and building an industry around the promise of riches, what would I do ? The answer of-course is "I would create a myth" - create some super-hero figure who achieved magical results and all those that follow aspire to be and be like. Now I do not have proof that this guy does not exist or even that he does not exist in the way made out, but I am reasonably sure the stories of his gains are not wholly true.

Recently, having been to a number of events in the UK (London) start-up community, I see the same or similar myths being used to create a booming industry around the promise of start-up riches. While I think there is a lot of great work being done, there is also a cult-like hype that simply is misleading, dishonest and a form of profiteering. Whilst I do not think that the people running most of these companies are dishonest ( I believe they think they are doing a good deed ). Prospective entrepreneurs (myself included) should be very weary. There are too many buzz words, to many recopies for success and far too many myths !

Posted by Avrono at 4:59 AM No comments: